‘Dreamgaze’ was formed in 2008 by Michael Wooley and Fuchsia Angel of Bella Lune. They met in an internet radio station chatroom, where they realized they had nearly identical taste in music. Within a couple of months, they began recording their debut album ‘Sound Colour’ in two separate studios, hundreds of miles apart. They released “Sound Colour” on Aetheria Music in October of 2009. They released their first music video for ‘Wasteland’ with the help of Light Pulse Studios in the Sprint of 2010. To be continued… 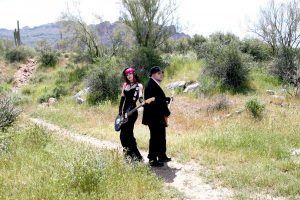 Michael is a music fanatic and has been playing guitar since the age of 12. His other music projects include, ‘Spiral Path’, ‘The Sound of Her Wings’ and ‘The Last Ghost’. He is also a freelance artist, who has had his artwork featured in Tattoo Flash, Tattoo Savage and more recently Morpheus Tales (from the U.K. ). Michael is currently working on a comic book series called “Cromwell Green”.

Fuchsia began playing music on the violin at age 8. She learned how to play the guitar and bass at age 19, and started her first band ‘Annadyne’ shortly thereafter. She is the primary singer/songwriter for the group ‘Bella Lune’, who has released 4 full length albums and has toured through Europe and Japan. 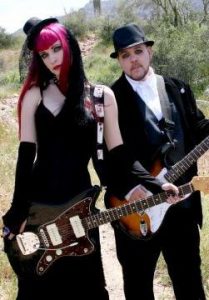